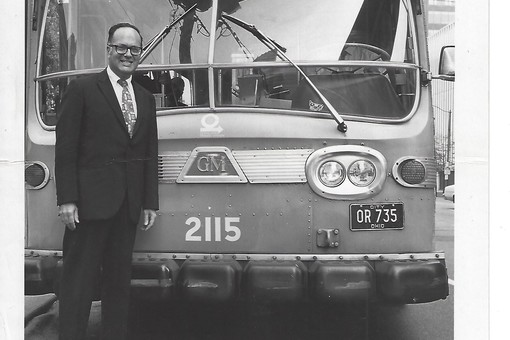 Connecting to the Community
Equity by Design
2018 State of Downtown: Enhancing Mobility
Paving the Way: What Cleveland Can Learn from the Indianapolis Cultural Trail
Planning the Next Northeast Ohio

Leonard Ronis was born in Cleveland on September 5, 1921, the son of Lillian and Max Ronis. He graduated from Glenville High School and received AB and AM degrees from Cleveland College at Western Reserve University.

After graduation he volunteered for the U.S. Army and served in Infantry, Foreign Language Training (Russian) and Signal Corps during WW II. He completed his military services as Officer in Charge of the Civilian Personnel Department. Upon his return, he was employed by the Personnel Department at the Cleveland Transit System, where he rose to Personnel Director, Operations Manager, Assistant General Manager and ultimately was named General Manager.

From 1968 to 1974, Ronis lobbied with the Ohio Legislature to create regional transit authorities and, with the creation of the Regional Transit Authority (RTA) in Cleveland in 1975, became General Manager. In his years at the helm, ridership rose by 70 percent. He won more than $320 million in federal funds for operations and capital work. Upon his retirement from RTA in 1982, The Plain Dealer noted: “Leonard Ronis devoted 35 years to Cleveland and Cuyahoga County public transportation and, in that time, gained a national reputation for professionalism. He deserves recognition for his tireless efforts to cope with the tremendous problems of moving around hundreds of thousands of riders daily. The problems of public transit have been addressed (here) more successfully than in any other major city.”

Over the following years, Ronis served as President of the American Public Transit Association (APTA) twice. After retirement, he was employed as a consultant by Parsons Brinckerhoff Quade and Douglas, an international engineering firm specializing in transportation projects. In that capacity, he provided advice and consultation to transit systems across the country for 23 years.

In 1990, Ronis was made a member of the APTA Hall of Fame. In 2005, he received recognition from APTA for 60 years of achievement and dedication to public transportation.

David Goss, who spent much of his career at CTS and RTA with Ronis, described him as a “giant in the industry in the ‘70s and ‘80s” who was highly respected and sought by others for advice. “He ate, slept and drank transit,” said Goss. “He was willing to help anyone who worked for him advance in the transit system, and many from Cleveland transit went on to other transit systems in the U.S."

"When I think of Leonard, I think of the work ‘leadership,’" said Mort Mandel, a close personal friend of Ronis since childhood. “He was a conceptual thinker. He didn’t just make existing things better. He saw what could be.”

Ronis was married to well-known Cleveland pianist Joan Terr Ronis, and was an avid supporter of and in frequent attendance at the City Club. He died on July 4th, 2012 at 90 years old. The “Leonard Ronis Transportation and Planning Forum” was established by his children and grandchildren as a loving tribute to his memory.