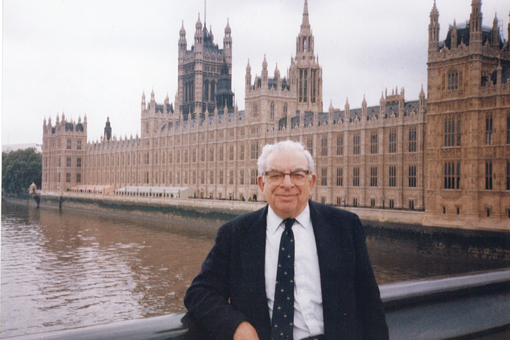 Myron Nathan “Mike” Krotinger received his BA degree in 1933 from New York University and MA and LLB degrees from Columbia University, where he was an editor of the Law Review. From 1939-1944, he was chief legal officer of the Cleveland four-state regional office of the Securities and Exchange Commission and participated in the reorganizations in the Federal courts of depression-afflicted companies, including the Auburn Auto Co. He counseled many of the IPOs of the 1950s, including those of Revco D.S. A five year course of litigation on behalf of Revco to defeat the Ohio “Fair Trade” laws included arguing before the U.S. Supreme Court.

Myron grew up in New York City and entered New York University at the age of 14. Later he taught graduate-level anti-trust law for 20 years at CWRU and chaired and participated for 10 years in seminars around the United States on behalf of the Practicing Law Institute of New York. He was chairman of Ohio State Anti-Trust Conferences in 1983 and 1984. His articles on corporation and anti-trust law have been published in the Columbia and Case Western Reserve Law Reviews. He has also counseled and participated in anti-trust litigation on behalf of leading corporations.