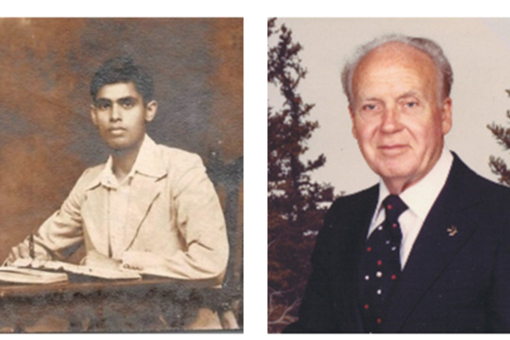 Brick by Brick: Building Hope and Opportunity for Women Survivors Everywhere
Investing in our Global Future: Why the Education of Girls Matters
Redesigning Public Education Systems for Today’s (and Tomorrow’s) World
After the Bell: The Power of After School and Summer Programs

This forum is presented in memory of Nathu R. Aggarwal and Roy G. Blackburn who set inspiring examples and exhibited a lifelong commitment to education, in particular women's and girl's education. This forum was established in 2018.

Nathu R. Aggarwal was born in 1919 in Moga, Punjab, India to a father who was a schoolteacher. He was a great believer in education having obtained a liberal arts degree followed by a graduate telecommunication engineering degree. He loved to learn and discuss new ideas and was dedicated to doing everything with integrity all his life. In his work de-bugging and running newly-built telephone exchanges all over India, he was glad that he made it possible for people connect. After retirement he built a manufacturing and real estate business. In spite of modest means, he and his wife sent all five of his children to private schools and then to college. Their daughter became a physician, graduating from the top ranked medical college in India, and all four of their sons graduating in engineering, with two of them from the Indian Institute of Technology and one going on to obtain a doctorate.


Roy G. Blackburn
was born in 1911 in the southeastern corner of Ohio to father who was a coalminer. Roy’s mother died when he was three years old and his father died five years later from black lung disease. Orphaned at just eight years old, he worked on farms in central Ohio. He graduated from Newark High School where he would often arrive by foot. For his whole life he had great respect for education and he and his wife managed to send all three of their daughters to college while he worked at Republic Steel in Canton, Ohio and in the early years also at a second job at a grocery. All three daughters graduated from college with one becoming a teacher, and another getting a master’s degree. Roy worked for Republic Steel for 45 years in various positions including production, sales, and service (notably, he was able to own fairly new automobiles all through his life including the depression years). Roy spent a large part of his life educating and mentoring young people in various forums including his church. Roy, with his generous heart, would have been happy to know that he could help support the spread of education and international understanding.