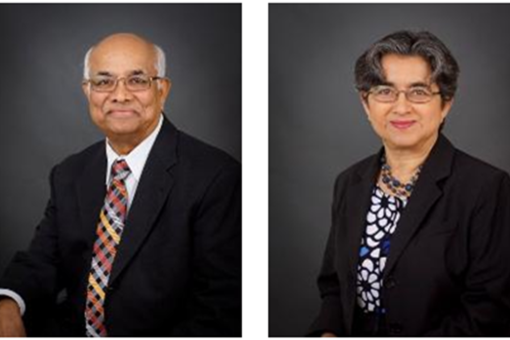 The Forum of Football: Browns Alumni’s Platform for Social Equality
2019 State of the Schools
Linda Darling-Hammond

The Shendures have been a valuable part of the Greater Cleveland business and civic community for the last three decades, receiving numerous awards for their accomplishments.

After completing his undergraduate studies in 1966 from the University of Pune in India, Ashok moved to the United States to pursue his masters in engineering from the University of Wisconsin at Madison. He then settled down in Solon, Ohio, working as Chief Engineer at Swagelock for 18 years. During this time, Ashok received his MBA from Case Western’s Weatherhead School of Management and, in 1986, founded BDS Financial Network, a financial services provider with branches throughout Northeast Ohio. He currently serves as Wealth Manager of BDS, and was named to the Financial Times’ 2013 and 2017 lists of the Top 400 Financial Advisors in the United States. Aside from his business endeavors, Ashok actively seeks to promote social and economic empowerment, and was a member of the Chagrin Valley Rotary Club for 14 years.

Rajanee also received her bachelor’s degree in engineering from India’s University of Pune, and like her husband received an MBA from Case Western’s Weatherhead School of Management. After working at the Corning Glass company, Rajanee worked at General Electric for nine years before joining Ashok at BDS Financial Network in 1998. She currently serves as Financial Advisor with BDS, and was named to the Financial Times’ 2016 list of the Top 400 Financial Advisors in the United States. Outside of work, Rajanee is a member of the Board of Trustees for Ursuline College and serves as Chairperson of their Investment Committee. In addition, she seeks to promote social equality as a member of the Solon Women’s Club.