The Steven A. Minter Endowed Forum 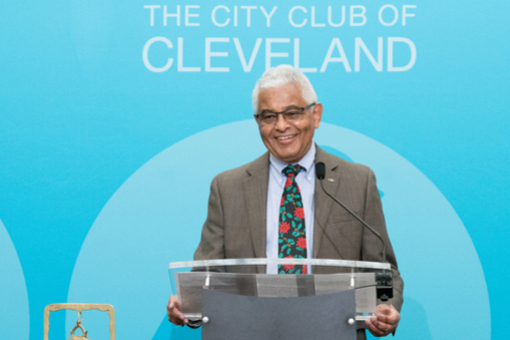 Steven A. Minter delivers the introduction for Marsha Mockabee on December 7, 2017.

With Liberty and Justice For All: Examining Black Freedom in America Today
A New Era of Justice
Shifting Mindsets: The Promise of a Two-Generation Approach
ACEs and Toxic Stress: Rewriting the Story for the Next Generation
Not a Crime to Be Poor: The Criminalization of Poverty in America
Remarks from Senator Bernie Sanders
Restacking the Deck: Why Restoring the Value of Work is Essential to Growing Our Economy
Ending Child Poverty Now
State of the County
Remarks from Condoleezza Rice, Ph.D.

For 28 years, Steve Minter served as President and Executive Director of the Cleveland Foundation, the first community foundation and second largest in the nation with assets of $1.5 billion. Following his retirement in 2003, he was appointed Executive-In-Residence at Cleveland State University. In May, 2010 he was appointed Interim Vice President of Advancement.

Outside the Foundation, Mr. Minter spent 15 years in positions with the government. He began his career as a caseworker at the Cuyahoga County Welfare Department in 1960, and rose through the ranks to become its director in 1969. In 1980, he served as the first Under Secretary for the United States Department of Education under President Carter. For five years, he was the Commissioner of Public Welfare for the Commonwealth of Massachusetts.

Over the years, Mr. Minter has served on or chaired boards of national and regional organizations in the fields of education, health and human services. Most notable are: Community Foundations of America, American Public Welfare Association, Council of Foundations, The Independent Sector, the Knowledge Works Foundation, and Policy Bridge.

He and his wife, Dolly, have three married daughters and five grandchildren. Mr. Minter died in September, 2019.