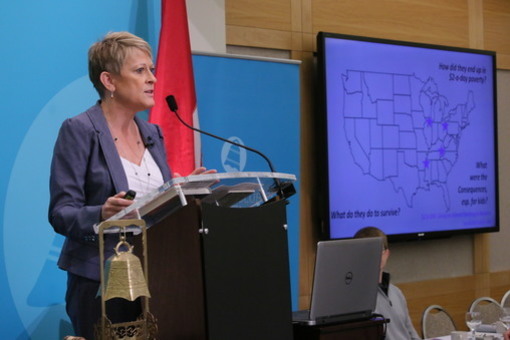 The Tom L.E. Blum Memorial Forum on Overlooked Citizens of the Inner City on April 15, 2016 featured

$2 a Day: Living on Almost Nothing in America
Changing the Face of Re-Entry
T. R. Reid
The Cradle to Prison Crisis
The Melting Pot Boiling Point: Immigration Debate in America

Tom L. E. Blum was a long-time member of The City Club.

A graduate of Central High School, he later studied law and passed the bar exam but never practiced as an attorney. Instead, in 1919, he went into business. With an investment of $200, he founded Factory Stores Company, providing food services to colleges, banks, hospitals, industrial plants and country clubs.

In 1964 he sold his company, and then called United Food Services Management Corporation, to a Chicago firm for $2.5 million.

Throughout his adult life, Mr. Blum was a physical fitness enthusiast, working out at the YMCA three times a week and doing so up to two weeks before he died.

Mr. Blum was also an avid hiker, often embarking on 40 mile jaunts near his home in Chardon. His nickname was “Tiny Tim,” suggested by his 5’2” and 130-pound physique. Behind his desk was the motto, “Be nice to people.”

Along with his brother, Mr. Blum founded the Tom L. E. and Martin E. Blum Foundation, for the purpose of supporting civic, health and welfare organizations. In 1974 the foundation gave $100,000 to the Society for the Blind to develop its park on the corner of E. 101st Street and Chester Avenue in Cleveland.

The gift to The City Club Forum Foundation endowment was made possible through the efforts of attorney Joseph G. Berick.