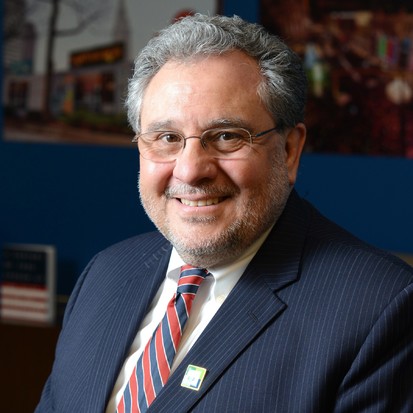 Paving the Way for Downtown's Future

Joe Marinucci will retire from the Downtown Cleveland Alliance (DCA) at the end of April, after serving as President and CEO since its inception 16 years ago. Created in 2006, DCA manages services within a district that stretches from the Cuyahoga River to East 18th Street and includes areas in and around the Flats. The Alliance's most visible presence is in the form of the yellow-clad Downtown Ambassadors who walk or ride bicycles throughout the neighborhood, encouraging a cleaner and safer environment for residents, workers, and visitors.

Now, as Cleveland begins to recover from the pandemic, Downtown faces both new opportunities and new challenges. Within the next 12 months, Cleveland will operate a mass vaccination clinic at the Wolstein Center, host the NFL Draft and the NBA All-Star Game, and re-open Playhouse Square. While construction continues on new apartments and housing, concerns remain about the long-term viability of some small business and restaurants, as well as the future of Downtown office space as many companies increase the number of remote workers.

Join us as Mr. Marinucci shares how the tools, resources and investments of the last 16 years can help pave the way for Downtown's future.